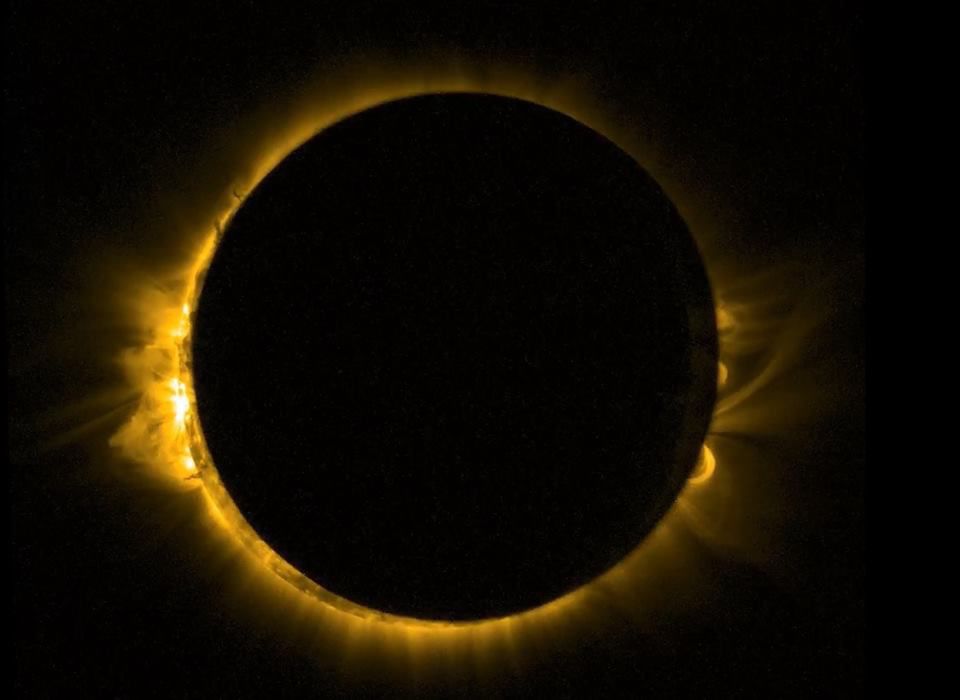 You may have started humming the Bonnie Tyler song, but it’s not our hearts that will be eclipsed . . at least not today.  Instead, today, Monday, August 21, 2017,  the moon will pass in front of the Sun, displaying a total solar eclipse to millions and a partial solar eclipse to many more millions.  A total solar eclipse occurs when the moon’s apparent diameter is larger than the sun’s, blocking all direct sunlight, turning day into darkness.

While the rest of the United States and many other parts of the world will experience a partial solar eclipse, a total solar eclipse will be visible to viewers within a 70 mile wide swath crossing parts of fourteen states of the continental United States: Starting in Oregon, continuing through Idaho, Wyoming, Montana, Iowa, Kansas, Nebraska, Missouri, Illinois, Kentucky, Tennessee, Georgia, North Carolina, and finally South Carolina before heading out over the Atlantic Ocean. That’s about 12 million US residents and another 10 million estimated tourists flocking in to witness the event!

If you want to know when the eclipse will start, peak and end near you, Vox Media has an Interactive Web Page that allows you to put in your  Zip Code and see the start, peak and end times, as well as the percentage of totality that will be visible in your area. You can also turn your smartphone or tablet into a guide for the event, using Android or iOS apps such as Eclipse Safari or Clear Outside.

Enjoy the rare and magnificent astronomical event and remember – safety first – don’t look directly at the sun.  Even if you are using “approved” glasses (Certified as ISO 12312-2 compliant) make sure they are from a legitimate vendor and they are actually legitimate.  As a test, put the glasses on and look at your brightest bulb or any really bright light — you shouldn’t be able to see ANYTHING (as in zero, nada, zilch, nothing!)  A safe solar glass filter will give you a view of the sun (and ONLY the sun) that will look like a full moon, surrounded by dark sky and it will also block UV and IR radiation.  If you look up and find the sun uncomfortable to look at, out of focus or with a haze around it, don’t use them (or if they are scratched or appear damaged in any way). According to the American Astronomical Society, those won’t be safe.

On October 6, 2015, the Court of Justice of the European Union invalidated the so-called “Safe Harbor” that previously governed data transfers between the U.S. and the EU (Case C-362/14 – Maximillian Schrems v. Data Protection Commissioner, 6 October 2015).

As you already know if you read our Legal Bytes’ posting in May concerning the US-EU Data Transfer Privacy Shield, personal data cannot be transferred to from the EU to a non-European Union/European Economic Area country, unless that country can ensure “adequate levels of protection” for such personal data. While the European Commission had identified a number of countries that met the ‘adequate protection’ test, the United States was not one of them and without the Safe Harbor understandings, transatlantic exchanges of data – both for commercial and national security reasons – were at risk of being non-compliant with EU regulations!  In an attempt to temporarily address the data transfer issues, the EU and the U.S. proposed a new framework for exchanges of personal data for commercial purposes, known as the EU-U.S. Privacy Shield (“Privacy Shield”) which was formally launched on July 12, 2016.

Further complicating matters, a new EU General Data Protection Regulation (GDPR) comes into effect on May 25, 2018.    In furtherance of a formal and more permanent agreement under the Privacy Shield and in contemplation of the new regulations, representatives of the U.S. and the EU have announced they will meet in Washington, DC during the week of September 18, 2017, for the first Annual Review of the Privacy Shield.  In advance of the meeting, the EU’s official Working Group (WP 29) sent the European Commission their recommendations and consistent with previous pronouncements, they believe the meeting should focus on enforcement of rights and obligations, as well as changes in U.S. law since the adoption of the Privacy Shield.  WP29 recommended discussions focus on these issue and that any formal agreement must deal with both commercial, as well as law enforcement and national security access.

These concerns and considerations are explored in more detail in our full Client Alert: No Certainty in Future of Privacy Shield as Transatlantic Consultations Set to Begin and it is clear that the September consultations may well be an indication of whether the Privacy Shield will prove an adequate regulatory regime for the transatlantic transfer of personal data and whether meaningful progress is likely in the current environment.

If you would like more information, a better understanding or need guidance regarding compliance with these regulations, contact Stephen Díaz Gavin, a Rimon Law Partner based in Washington, DC or Claudio Palmieri is of counsel to Rimon, P.C. and the principal of Studio Legale Palmieri –Rimôn Italia in Rome, Italy. Of course you can always contact me, Joe Rosenbaum, or any of the lawyers at Rimon with whom you regularly work. 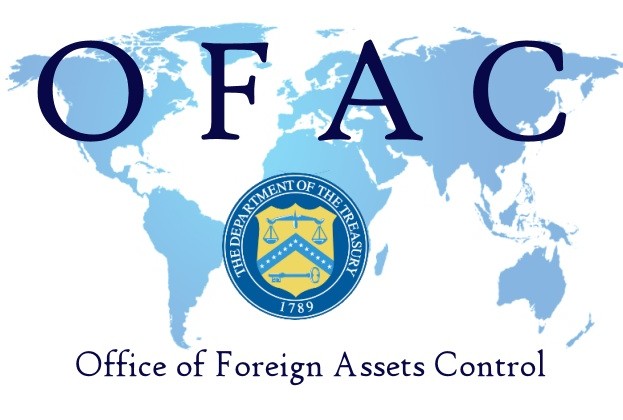 On August 9, 2017, the Office of Foreign Assets Control (OFAC) at the U.S. Treasury Department, issued a Press  Release and identified Mexican national Raul Flores Hernandez and the Flores Drug Trafficking Organization (Flores DTO) as Significant Foreign Narcotics Traffickers pursuant to the Foreign Narcotics Kingpin Designation Act, also known as the Kingpin Act. OFAC also designated a large number of individuals and 42 entities for involvement with, and acting as fronts for, Raul Flores Hernandez.

As of the issuance date of these designations, no U.S. persons, companies, nor any individuals in the US, are allowed to conduct transactions with these individuals or entities.  Penalties under the Kingpin Act can run as high as $10MM per violation, with individual violators subject to imprisonment for up to 30 years.  Even civil penalties for inadvertent violations can run over $1M per violation.  It is worth noting that OFAC violations are based on strict liability.

If you would like more information, a better understanding or need guidance regarding compliance with these regulations, contact Jill M. Williamson, a Rimon Law Partner based in Washington, DC. Of course you can always contact me, Joe Rosenbaum, or any of the lawyers at Rimon with whom you regularly work.

Although the U.S. Securities and Exchange Commission (SEC) has been studying blockchain and cryptocurrencies since 2013, until its recent pronouncement, the SEC had been silent with respect with respect to its regulatory authority with respect to Initial Coin Offerings. An Initial Coin Offering (“ICO”) is a company’s release of its own cryptocurrency in exchange for tokens of a pre-existing cryptocurrency (e.g., bitcoins and in rare instances, a fiat currency – currency backed by the issuing government such as Dollars or Euro). The ICO issuing company effectively ‘sells’ a pre-defined number of coins or crypto-tokens to purchasers.

The surge in ICO’s has been so dramatic, that in 2017 ICO’s surpassed venture capital as the primary source for funding blockchain ventures and recent news reports suggest that funds raised through an ICO were “crowding out” venture investors. Most ICO’s in the United States have been conducted without registration under U.S. securities laws. Typically, the issuer simply provides potential investors with a “White Paper” outlining how they intend to use the money raised by the ICO.  To put it charitably, the quality and detail of these White Papers varies widely.

The similarity between the term “Initial Coin Offering” and “Initial Public Offering” or IPO is more than coincidental and these similarities have now prompted the SEC to issue its first pronouncements on the subject of ICO regulation under the securities laws and on July 25, 2017, the SEC did just that and issued the following three documents:
• An SEC Report of Investigation;
• A Press Release about the report; and
• Guidance to Purchasers of Digital Tokens

The issue the SEC has been grappling with is the application of the definition of a “security” to the tokens being issued in an ICO.  In a 1946 Supreme Court case Securities and Exchange Commission v. Howey Co., the U.S. Supreme Court identified four criteria (which have evolved a bit since that decision) that need to be present for an investment contract, within the meaning of the Securities Act of 1933 and the Securities Exchange Act of 1934, to be a security.  They are: (1) the investment of money or other consideration, (2) In a common enterprise (although there is a split over how “commonality” should defined), (3) where investors expect a profit, and (4) any returns to the investors are derived solely from efforts of the promoters (issuers) or other third parties. The Court noted that the facts and circumstances of each case will determine whether an instrument is a security, even if it does not technically fall within the narrow criteria of their specific decision.

The SEC’s documents are silent on so-called “utility tokens” or “service tokens” – tokens that allow the purchaser to obtain a service (e.g., data storage; online games) and it is likely we will hear more from the SEC in future, since their press release contained a clear warning the securities laws and regulations apply to ICO’s. Although not all tokens sold in an ICO will automatically be considered a security, there remains significant uncertainty and most knowledgeable attorneys in this arena have already been advising their clients to avail themselves of the exemptions to the registration requirements (e.g., Reg D, Reg A+ or Crowdfunding under the JOBS Act).

This is an extremely complex and challenging (and evolving) area of the law and regulation and you can read the entire Client Alert: Casting Light Over Recent Events Concerning the SEC’s views on ICOs, Cryptocurrencies, Tokens, Securities and their Legal Repercussions.  Of course, if you want to know even more or need guidance, you should contact Dror Futter directly and you can always contact me, Joe Rosenbaum, or any of the attorneys at Rimon Law with whom you regularly work.