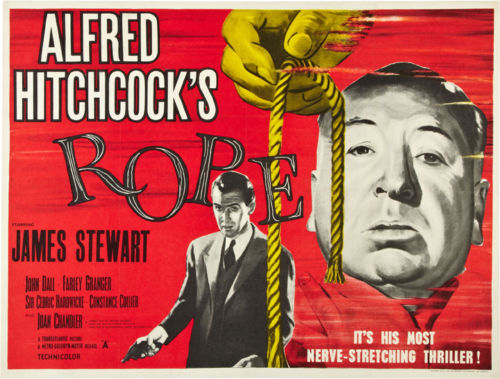 Rope, released in 1948, is widely recognized as one of Alfred Hitchcock’s greatest technical achievements. The plot of Rope was inspired by the real life case involving  Leopold and Loeb, two affluent students who murdered a child to validate their intellect. But the real significance of the film is Hitchcock’s technical innovative cinematic achievements.

Rope was shot in real time – a cinematic first.  While most early films were composed of hundreds of shots, each lasting only 5 to 15 seconds (Hitchcock’s The Birds was edited from 1,360 shots), but Rope required only 10!  Each scene was shot continuously for 10 minutes, without any interruption – the full length of a film reel at the time. Whenever the film reel needed changing, the camera operator would focus on a blank surface. They would then start the next reel with the same shot, making it appear continuous.

Rope was also Hitchcock’s first color film and aside from the street scene under the opening credits, the film was shot on a single set with almost no editing. The set had walls on rollers so the walls could be moved out of the way for camera shots and then replaced when the walls were to come back into the scene. The large technicolor cameras were placed on dollies so the fully mobile set, all using lubricated surfaces, would keep noise to a minimum. Again, Hitchcock recorded the soundtrack directly – at the time recording live dialogue for a motion picture was previously unthinkable.

Like a military operation, actors had carefully choreographed cues and a team of sound technicians and camera operators kept everything in constant motion. Even the cyclorama used for the background shots was groundbreaking – the largest backing ever used on a sound stage. A cyclorama is a panoramic image inside a cylindrical platform, intended to make viewers feel as if they are in the midst of the scene. The cyclorama used for Rope had models of the Empire State and Chrysler buildings, chimneys with smoke, lights going on and off in buildings, neon signs blinking. Clouds made of glass changed position and shape 8 times and the sun slowly dips below the horizon as the movie unfolds.

Bottom line: By experimenting with innovative cinematic and recording techniques Hitchcock challenged many of the basic principles of editing and film-making and encouraged others to begin challenging how films were being made!

For you Hitchcock fans, another bit of trivia.  As you know, one of trademarks of a Hitchcock film is the fact that he makes a cameo appearance in most of his films – and this one is no different.  At 55 minutes and 19 seconds into the movie, Hitchcock’s trademark profile can be seen when a red neon sign in the background starts blinking. In the scene, as some guests are escorted to the door, the actors stop momentarily and the neon sign flashes in the background. 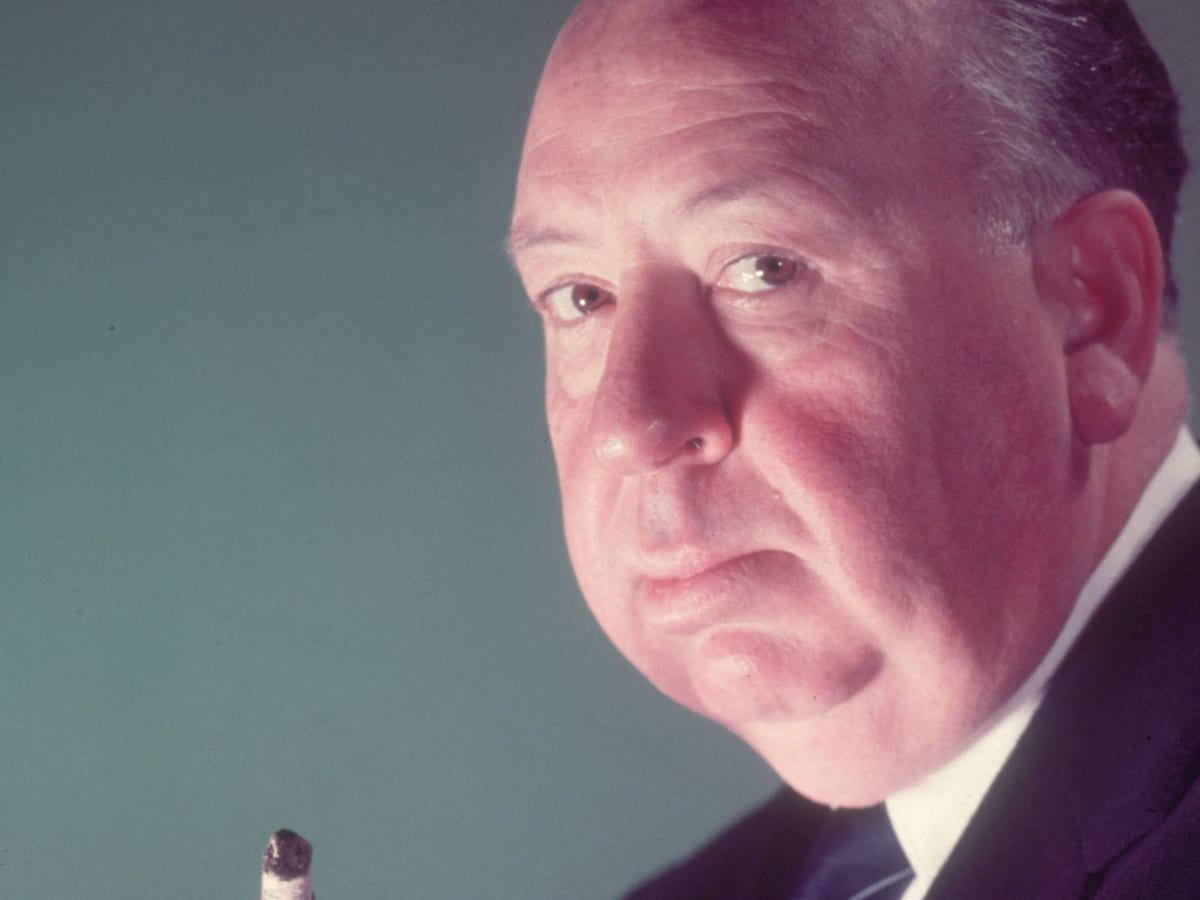 Which Alfred Hitchcock movie, originally started as a “stunt,” is considered one of the most innovative, significant and groundbreaking events in cinematic history? 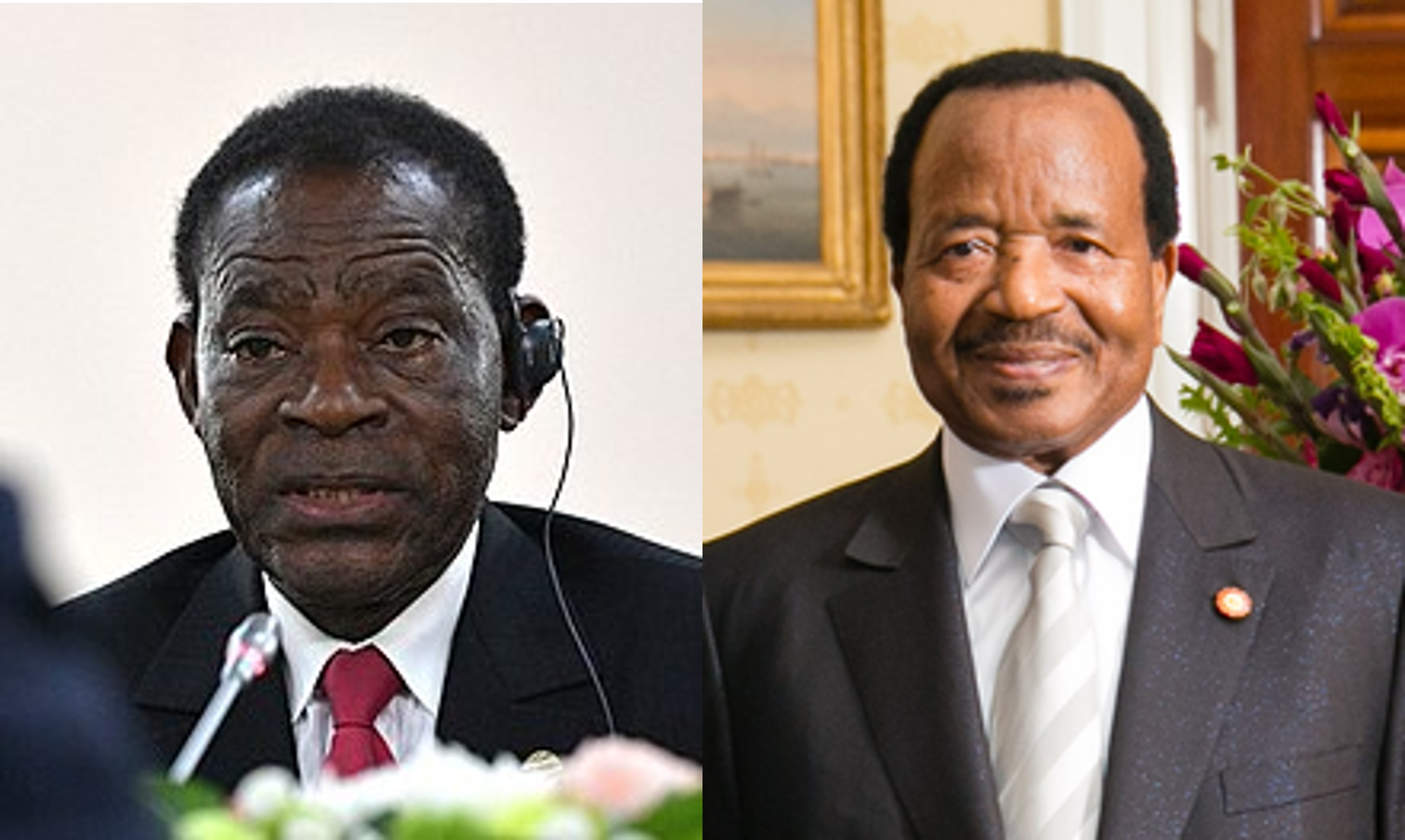 President Teodoro Obiang Nguema Mbasogo (shown above on the left) has served as President of the Republic of Equatorial Guinea since 1979. As a politician and former military officer he is the second-longest consecutively serving current non-royal national leader in the world after Cameroon’s President, Paul Biya.

Paul Biya (shown above on the right) has served as President of Cameroon since 1982. President Biya is the second-longest-ruling president in Africa, who also happens to be the oldest head of state in Africa, and he is also the longest-ruling non-royal leader in the world. 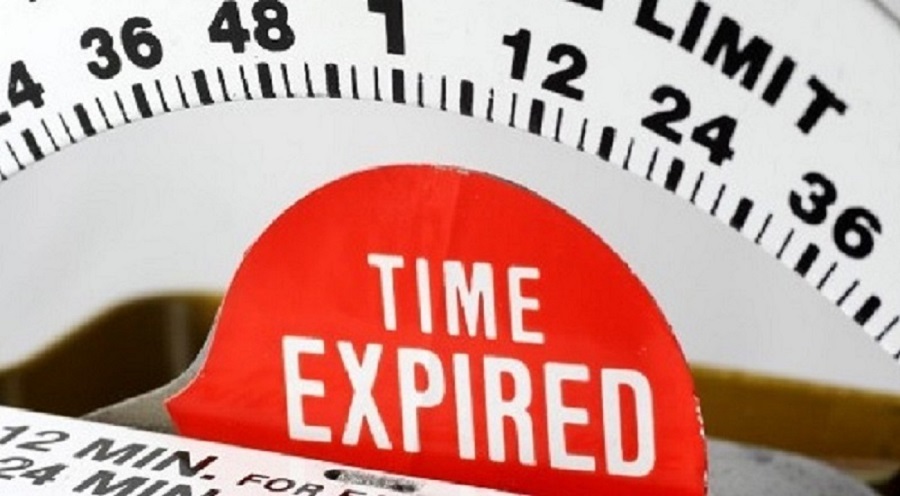 Who is the longest-serving President in the world? 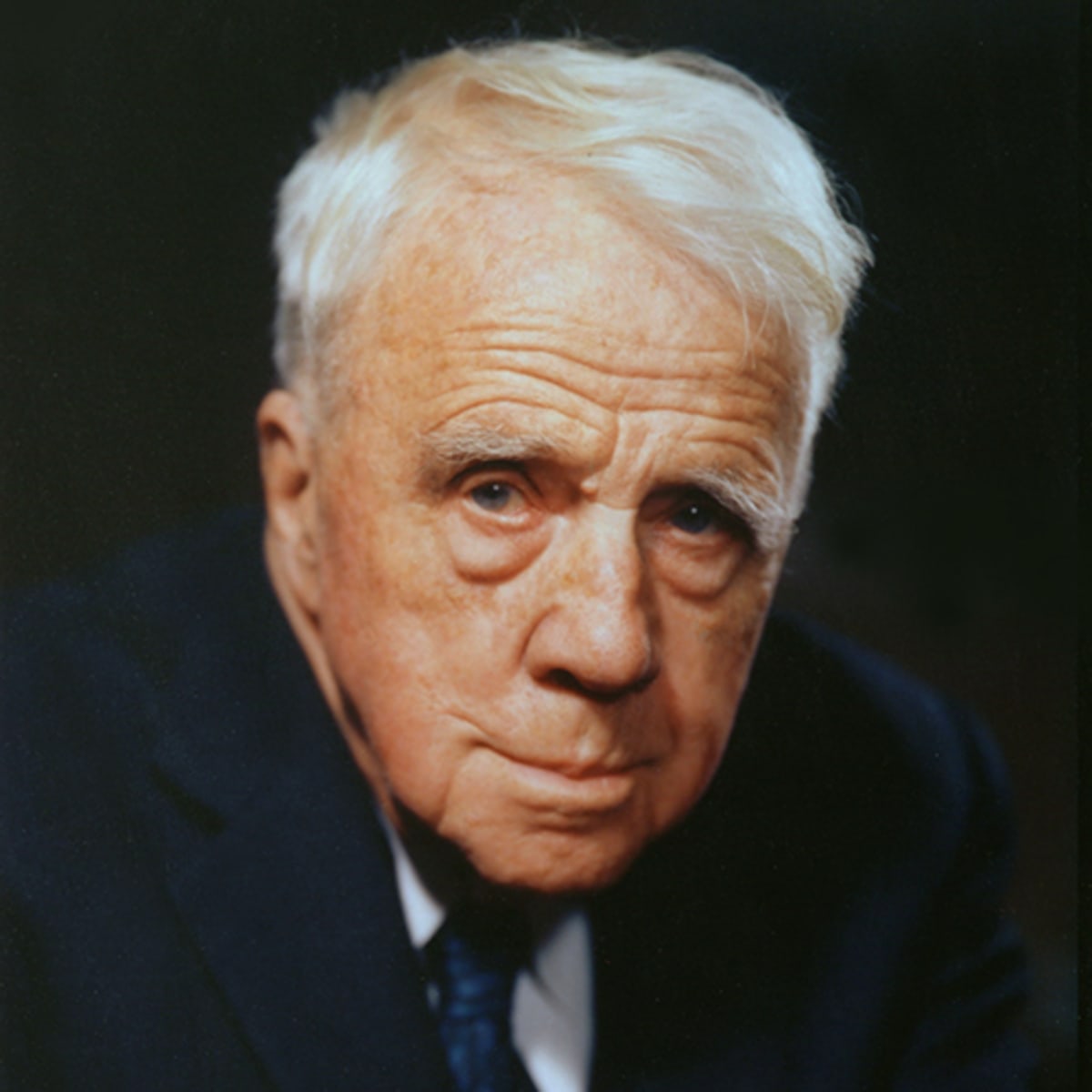 “And that has made all the difference” is the final line in the Robert Frost poem, The Road Not Taken. 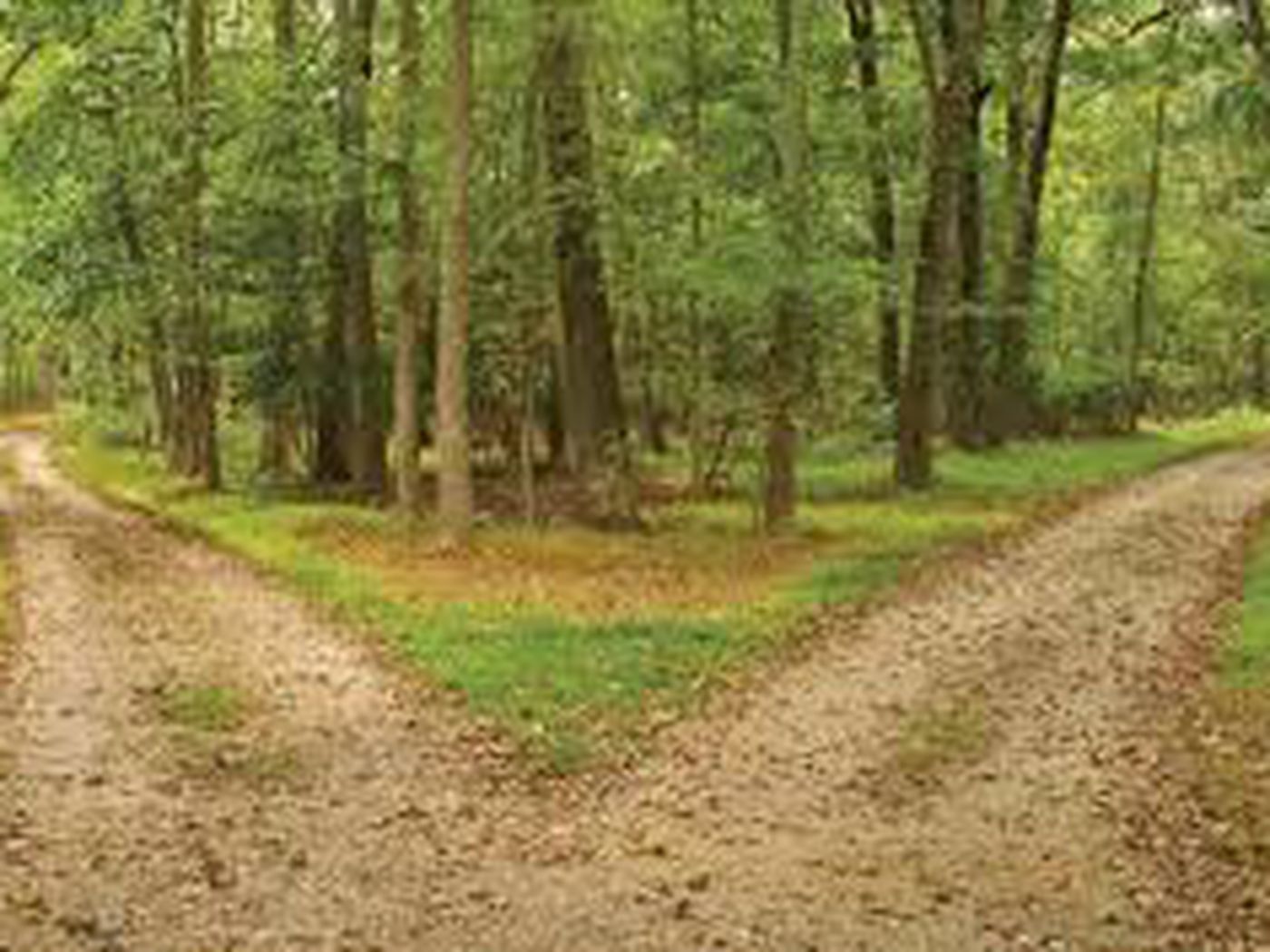 “And that has made all the difference” is the final line in what famous literary work? 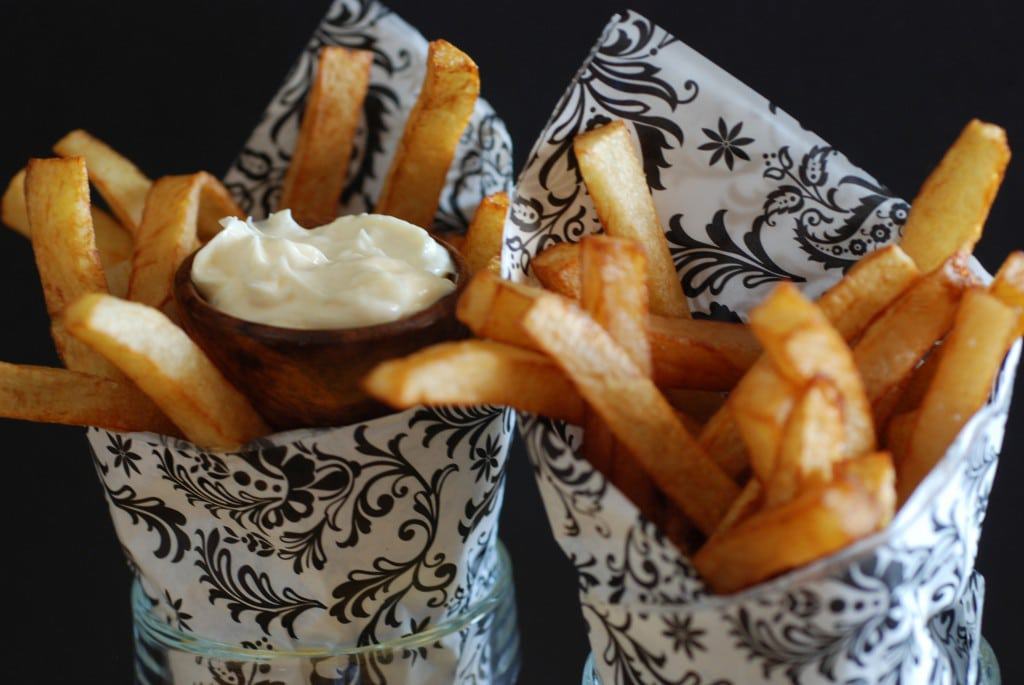 Did you think that because of its name, “French fries” were a traditional potato treat first prepared by the great chefs of France?

If you did, you would be wrong! It appears most likely this universally beloved potato dish was invented in Belgium sometime in the winter of 1680. The BBC has reported that when the fried fish lovers of Namur couldn’t find fish to fry because the river was frozen that winter, they found something else to fry – the mighty potato.

Although some of you may question the accuracy of this legend, Belgium sought to have UNESCO add the dish to Belgium’s list of cultural treasures and in 2017, achieved success!

Want to know why “French” has been added to the name?  Most culinary historians attribute the addition of the term as a reference to the way it is prepared, not it’s citizenship or origins.  “Frenching” describes a method of cutting food that allows all sides of an ingredient to be exposed to heat and cook evenly. For those of you that want to be sticklers for technical and political correctness,  a French fry should actually be referred to as a “French fried potato.” 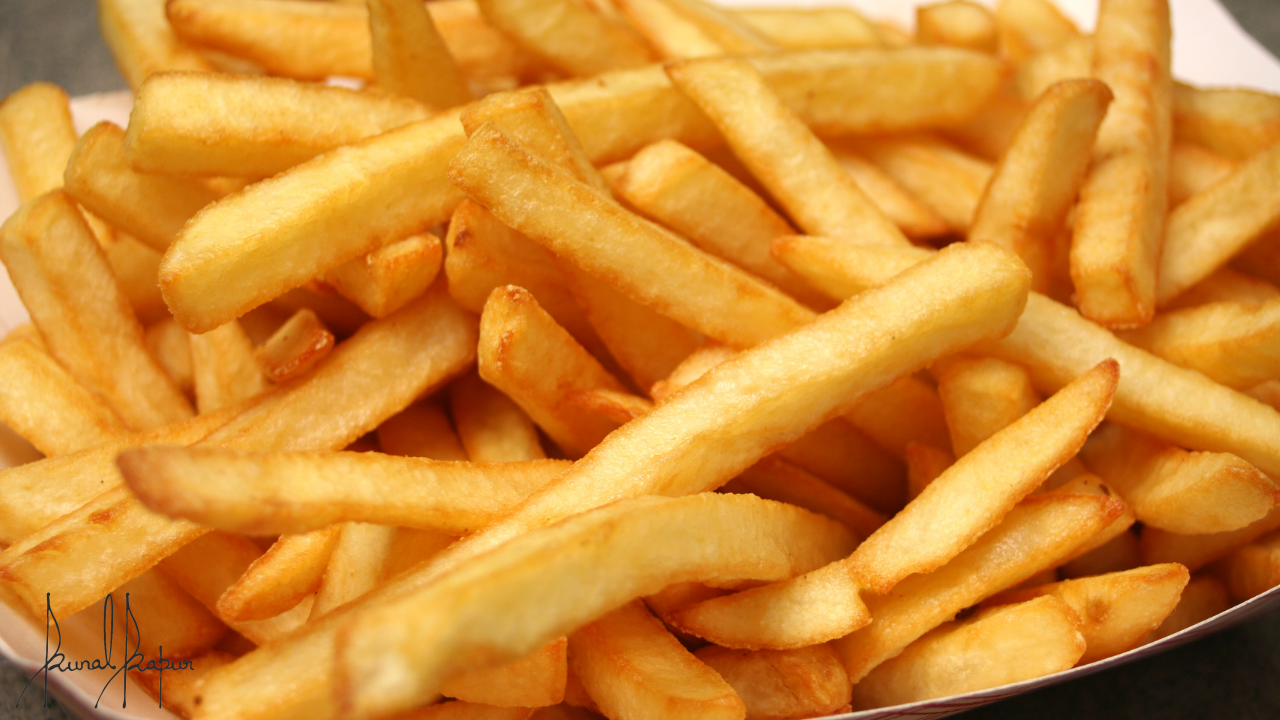 Where did French fries originate?

Hint: Not in France! 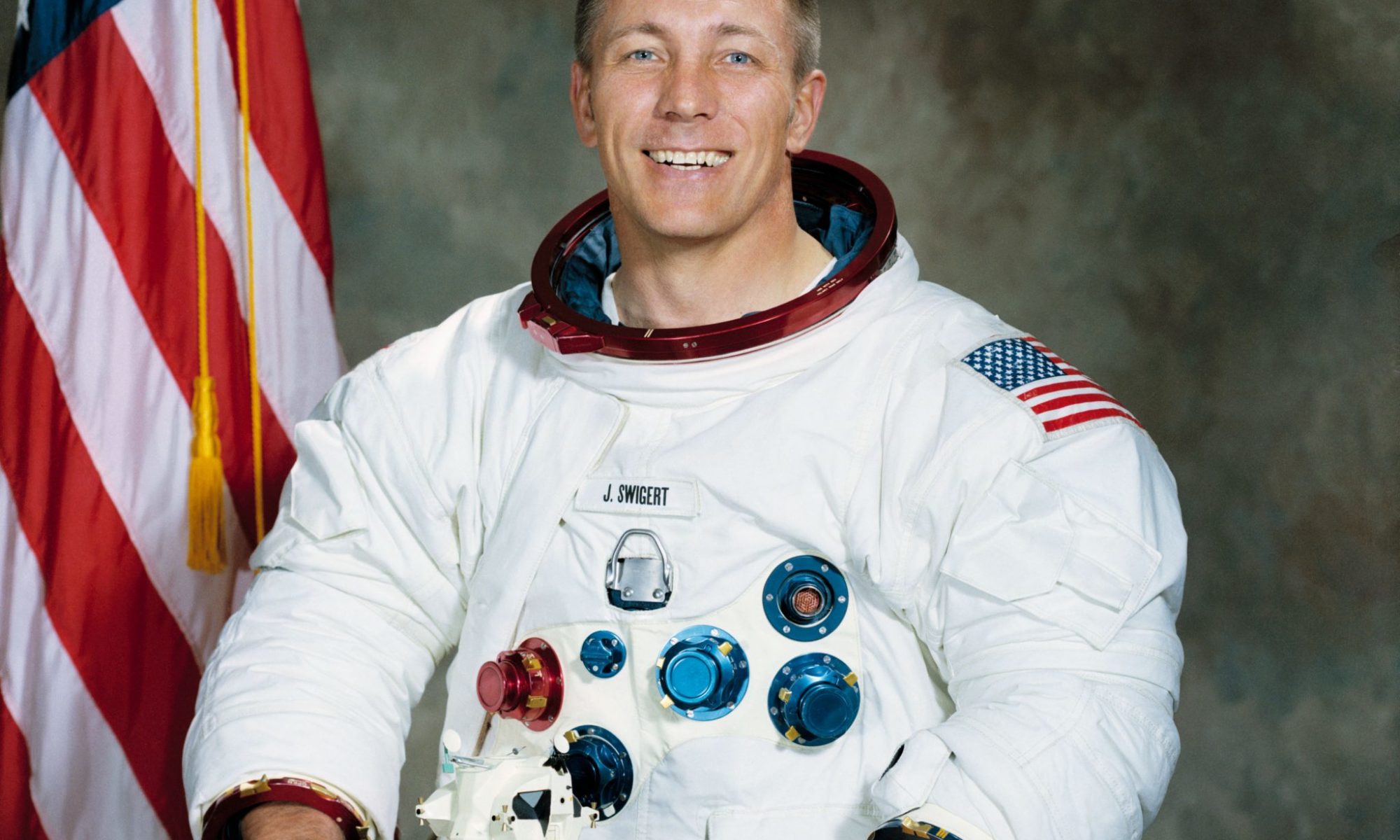 As Jack Swigert, the command module pilot for Apollo 13, found out, even an astronaut in space needs to file his taxes on time (or ask for an extension).  Commander John Leonard Swigert Jr. joined the crew at the last minute and was in mid-mission in space, when he realized he was going to miss the April 15th tax filing deadline.

He radioed Houston to request an extension and although the ground crew thought he was a joking, he wasn’t!  The NASA transcripts document his transmission as “Hey, listen, it ain’t too funny; things kind of happened real fast down there, and I do need an extension. I didn’t get mine filed, and this is serious.”

Commander Swigert later ran for Congress, and during his campaign was diagnosed with cancer.  Although he won the election for Representative  to the U.S. House of Representatives for Colorado’s 6th District in 1982, he sadly passed away before being sworn into office. Commander John Leonard Swigert Jr. was the recipient of both the NASA Distinguished Service Medal as well as the Presidential Medal of Freedom. 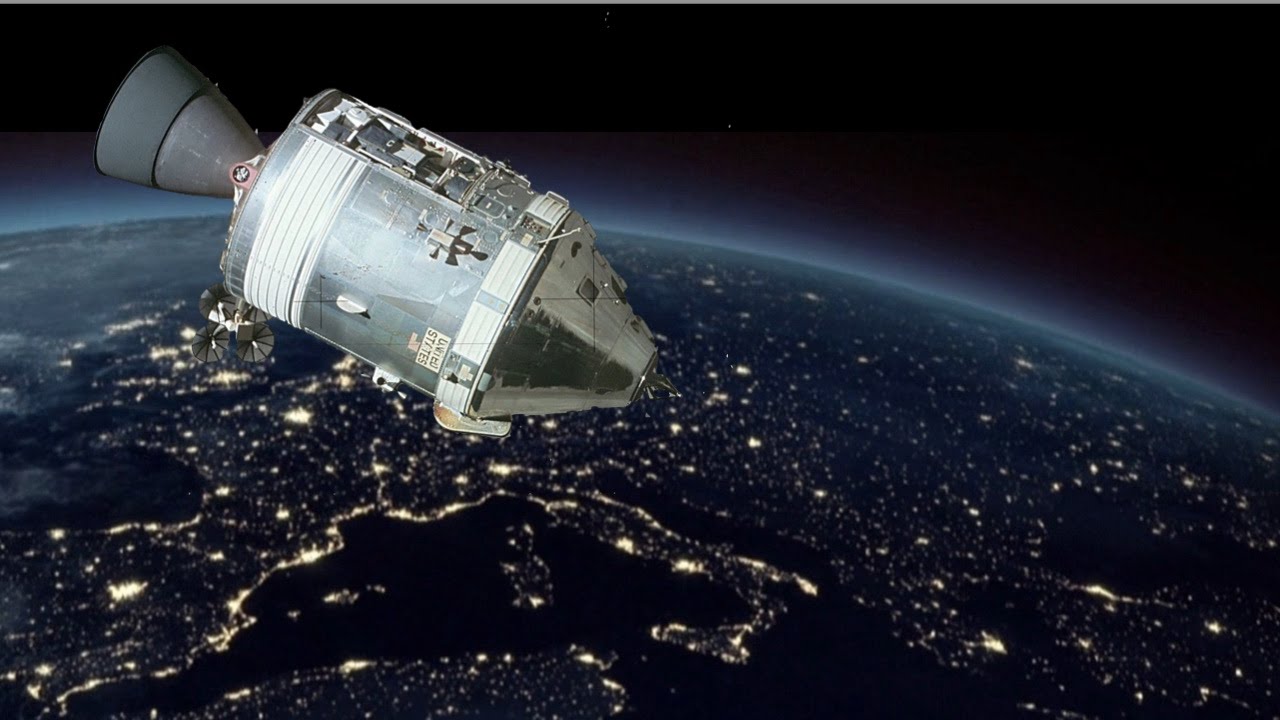 If an astronaut who is a U.S. citizen goes into space and is not on Earth, do they still have to file taxes today (April 18, 2022)?