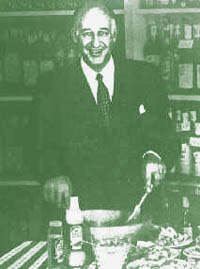 While it has been difficult to confirm all the facts, according to the story, an Italian immigrant, Cesare (Caesar) Cardini, operated a restaurant in Tijuana, just south of the Mexican border.  Although he lived in San Diego, California, the restaurant was intended to attract tourists from the United States who were frustrated by US Prohibition laws in the 1920s.

Legend has it that Cesare threw some ingredients together over the July 4th weekend in 1924 and his friends loved it –  romaine lettuce, garlic, croutons and Parmesan cheese, hard-boiled eggs, olive oil and Worcestershire sauce.  We can add a bit more to the myth, by noting that his brother, Alex, is credited with adding anchovies in 1926.

Although they originally referred to it as an “Aviator’s Salad,” it was so popular that the salad, including the anchovies, became an iconic standard and was renamed the “Caesar salad.”  Yes, it’s possible the first combination of ingredients might have originated in differing variations or in different places, but the Caesar salad we know and love today became famous in Tijuana, Mexico!