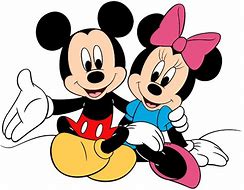 Mickey and Minnie Mouse appeared together in the very first Disney short “Plane Crazy” on May 15, 1928 and have been together ever since.  Walt Disney probably never imagined at the time, that the little drawing of a mouse would go on to be probably the most recognizable and iconic cartoon character on the planet. What he also could never have imagined is that there are two people behind the scenes that very few people know about, who met because of these two mice and their lives were intertwined with Mickey’s and Minnie’s for a very long time happily ever after! Can you figure it out?